1. Traces of late '80s and '90s boardgaming vibe for all players (casual and dedicated)
2. Hidden levels of strategy and co-op fun added to some standard gaming mechanics.
3. Dice roll reliant with a lot of luck involved (but cool ways to mitigate much of this)
4. Really great artwork, components and fab use of hero/sidekick player board creation.
5. Opportunity to have speedy, disposable fun in the Firefly universe.

That's the guts of our summary on this little known (and seemingly little played) piece of Firefly gaming. Basically, if you fancy summat that doesn't involve a really long session, explaining lots of rule sets and is accessible to most fans - then Fistful of Credits is a good option. Using a media example, it's kinda like M.A.S.H compared to GF9 Firefly The Game's Full Metal Jacket. Both have the same thematic setting (Vietnam War) but each offers a different type of experience.

And like us, you can be fans of both. Especially if you're a Browncoat. 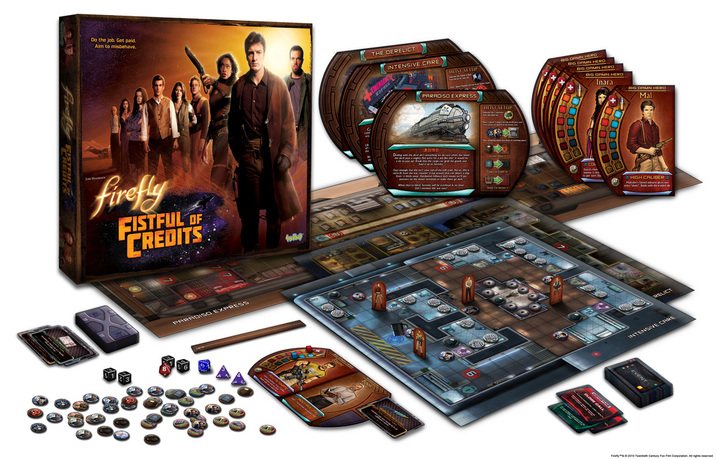 HERE'S WHAT WE THINK

We say there's nothing wrong with a game including a lot of luck and randomness sitting within the Firefly universe. Plus, there are several cool ways to mitigate this and immerse yourself into the characters. And it's not really kiddie-level easy. There are still decent mechanics and adult gamer ideas in here, such as equipping your teams, selecting who helps out who, crew/squad movement tactics on maximising the 'shiny effect' of everyone - and a degree of roleplaying if you're in the mood. It's light but it's there. And it's great to have a ground-based experience within the Firefly universe too. Getting our hands dirty on one of 3 heists that come with the game really does help pretend we're in the episodes of The Train Job, Bushwhacked and Ariel respectively.

We don't usually add much in the way of reviews to this site, but we wanted to add a few more words about this game for a change, as we believe that the limited number of reviews out there are unfairly harsh. Whether it's Amazon buyers talking about some misunderstood rules, or gamers expecting a more strategic and cerebral experience - it'd be remiss of us not to plug this hidden gem and offer an alternative viewpoint.

Some have bemoaned the lack of scenarios; well, three heist style scenarios on three maps is a pretty good start, when other similar games would only have one. And, with a minor tweak/house-rule about what happens when you roll a 1 (since acknowledged by the designer as a legit approach) this game goes from an okay-ish game to a great game really quickly. Using a bit of common sense applied to character-only scenarios also opens up all 3 lovely map boards to every single character, providing 70+ possible team combinations (thanks to the reversible hero/sidekick options for all 9 of the crew) that each offer very different tactics, strategies and ways to interact.

Oh and a big shout out to all the artists involved on this project - we love the nice balance between character likenesses, unique art styles and clear typography. And you can really tell they know their reference material. Well done. The rules have been called out online a bit too. That's also unfair in our opinion, as 95% of queries are either fairly obvious, or rely on a degree of common sense and logic. Not the designer's fault surely. The booklet that comes with the game is also lovely and well laid out. Only gripe is the timer/spawning mechanic, but there are several options to 'fix' this and transform the game, including some in hindsight from ToyVault.

So, the worst thing about this game for us, is the availability outside of the US. Bleedin' difficult for sure. But if you can pick one up without paying a small fortune, then just go for it. As long as you know what type of game it is (ie: not a meaty Firefly The Game), we think any Browncoat will have fun with this and get immersed - and it doesn't require 1/2 day set aside to set up and play.

Yes, there is lots of random bits, so if you like full control and influence over gaming outcomes , then it's not for you.
Yes, the strategy is limited when compared to other modern games.
But there are some solid bits of decision making and tactical plays when you dig a bit deeper.
And most of all, it's accessible, enjoyable, inclusive and most of all - fun.

This is just our opinion of course, but we wanted to throw it out there as a counter view - especially with some crushing words out in the 'Verse from some people that might deter Browncoats from investigating further. We say give it a chance.

Please let us know your thoughts or experiences if you own this or have played it with friends or at an event.
​​​
​- Number of players: 2-4 officially (but heck, let's say 1-4 as Steve has enjoyed this solo playing 2 or 3 teams)
- Favourite bits: Components and art are lovely. 3 different maps are good, but we mostly like the hero/sidekick combo approach.
- We say: It feels like an accessible board game when you were a kid, but now with some modern day elements and hey, some Firefly.
- Anything else: Hard to get hold of, plus the few reviews out there are unfairly harsh. That's a shame, as we really love this one.
- Browncoat rating: 8.0

As mentioned on the introduction page, we've tried to be helpful to both potential buyers and existing owners of this game. Although we don't think there can be that many current owners of this game, which we think is a shame. A bit of frothy Firefly fun is always shiny.

​Like the other games, we've got links to online reviews, helpful guides and other downloads that add to the gaming experience.

WHERE TO BUY IT

We sometimes have copies for sale at trade shows (and occasionally in our store) and you may well see it at your Friendly Local Game Store. But, for all things Firefly, we tend to find that Amazon is often the cheapest place to get things from in our opinion.

​So, if you'd like to help us to keep on doing what we do, as well as support our charities - please consider clicking on the links below and purchasing directly. We'll get a few pennies towards our mission - and you'll get your game. We've added links for the UK and US versions of Amazon, depending on preference. We are so grateful to anyone who supports us and our charities in this way. You rock.

Online review and look at components - another positive review! Check this out from MKTabletop blog, as it largely echoes our view
Quick unboxing - German video (only other video on YouTube we think) from Katrins, checking out the components
Full game rules - PDF download of the rules that come with the game
Quick start rules - Another PDF, useful if you already own the game or want a taster of the first scenario
Errata - A few updates from Toy Vault that clarifies a few things for existing owners